This is the Secret to Success in Raising a Bilingual Child 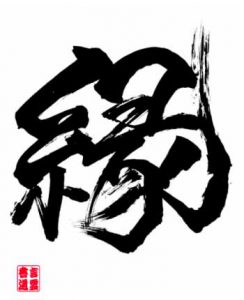 This inky image, created by the calligraphy artist Ryujin Kobayashi, conveys the essential secret to success in raising a child with active bilingual ability.

In Japanese, this kanji character is pronounced "en" and can be roughly translated as "fate" in English. And when it comes to the bilingual journey, I suggest that the fate of every family is rooted in these two simple letters of "en": the "e" of "exposure" and the "n" of "need".

You see, these two "core conditions"—exposure and need—are at the very heart of bilingual success. The first condition, ample language exposure, is the all-important fuel for generating strong, steady progress in any language. Without significant input in a minority language, the child may develop some degree of passive ability, but won't yet be able to produce substantial output.

While language exposure is universal—a requirement for every family with a bilingual aim—the second condition, need, is generally a necessity, too. When the child doesn't feel a genuine need to actively speak the minority language, because he or she can communicate with others in the majority language, this lack of need often undermines the child's motivation to use the minority tongue.

Typically, though, when children are not using the minority language as actively as the parents wish, this difficulty can be traced to shortcomings in both exposure and need. When there is insufficient input in the minority language, children aren't able to grow as comfortable or confident in its use. And when need for this language is lacking, their majority language side is then further enabled. Children, after all, are only being pragmatic when they rely on their stronger language to communicate, particularly in situations where there's no real reason not to communicate in that language.

In my work with bilingual families over the years—as in the consultations I'm so pleased to provide through HaBilNet—I focus intently on these two "core conditions" for fostering active language ability by probing this central question:

In what practical ways can parents strengthen exposure, and fortify need, in order to generate greater progress for their children on an ongoing basis and more satisfying long-term success over the years of childhood?

While every family is different, so the answers to this question will vary widely, the question itself poses the same pivotal challenge that all parents face on their bilingual journey. Moreover, since this journey is continually evolving as time passes, it's a question that must be addressed over and over again, with fresh answers, as circumstances demand.

The secret to bilingual success, then, is straightforward: families must satisfactorily fulfil the two "core conditions" of exposure and need. In this sense, what to do seems simple enough, yet, depending on your situation, how to do it can be challenging indeed. Still, it's through your persistent efforts to effectively address these two conditions as best you can, day after day and year after year, that you will determine the greater success—the greater fate—of your bilingual quest.

Adam Beck is a HaBilNet Active member and consultant. Adam is the author of "Maximize Your Child's Bilingual Ability" and "I WANT TO BE BILINGUAL!" and the founder of the blog Bilingual Monkeys and the forum The Bilingual Zoo. He lives in Hiroshima, Japan.

HaBilNet wishes to thank Ryujin Kobayashi
for giving us permission to use the image in this blog post.

Schrijf u in op onze Nieuwsbrief